So much can happen so quickly …..

2PM Saturday Nov 17 - I received a message from someone that they wanted to donate to help
victims the Camp Fire. They asked me if I could take care of the donation for them. It was a sizable
donation and I quickly felt the weight of the responsibility. I called the first person I could think of
that could help me with this…. Connie Willard of Project Spirit Horse Rescue. I asked Connie
Willard if Project Spirit would help to put the money in the hands of those directly effected.
Connie, of course, said yes!

We then became keyboard warriors and soon Elysa Greb with Barn Mountain Equine Supply
was the first to answer the call, donating 10 bags of cubes.

Terry Haney Wells with Total Equine Services and her husband Clinton quickly jumped in with a
unit of hay -- we were on a roll!! Then, Samantha Mitchell talked to Paul Bair, who donated a unit
of hay, and we moved to find a second truck and trailer because the first one was filled! April Haynes and Sandra Sims stepped forward with a second truck and trailer and we began to look
for hay to load on it. Flowers Farms was willing to discount a unit for the trailer and we THOUGHT
​we were all set, and then ….

Terry Haney Wells spoke with her neighbor about getting a squeeze to put the hay on our trailer and all sorts of crazy things escalated quickly. Brad Hadwick with Hadwick Trucking donated his truck and time to make the trip, and the Wells stepped up with SEVEN units of hay! Holy Moley!

Dayna Barbee brought in over a dozen bags

Dayna and Deven tossed in some feed buckets

and halters as well.

WOW! Now where to take it all??

The Gridley Fairgrounds seemed to be the best

place to start, and with Klamath feet on the

thing started. Vito directed us to our first drop-off

peeps pointed us to our second target, Jan's

Rails to Trails. Vito, his daughter, Jess, and the

many volunteers helped offload the rest of the

hay and we took a few moments to learn about

Connie Willard, Les Hathorn and I started home with an empty trailer and a full belly (if you have never tried spinach tamales, you MUST) and a promise to return.

Why am I telling you this story? Because every day I hear people say that they want to do something... they want to help.

PLEASE do something! Reach out. Ask someone... anyone... if they know what help is needed and where to donate. One tiny ripple (thank you for the term, Linda Bacon) was started by one person making a donation and look what happened.

PS: Also, thank you to Laurie Kayser McNally for taking care of the KEC critters so I could leave at a moments notice.​

in the memo line: Hope for the Heart Relief Center

Checks can be dropped at any of the location centers below, or mailed directly to:

Office door is at the side

Donation barrel is in the "clubhouse" in front of the main barn. Cash, checks, and gift cards can be placed in the locked mailbox in the clubhouse.

NOTE: The gate requires a code to enter the facility, so arrangements must be made prior to drop-off to get in.

Hours and days by appointment for non-boarders 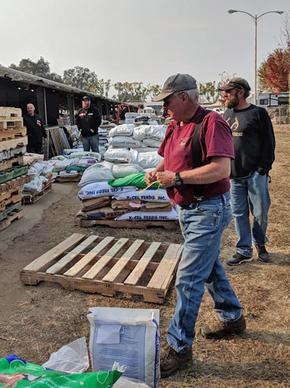 How To Help Camp Fire Victims

A community rallies to support victims of the Camp fire

Friends, our help is needed by those suffering losses most of us can only imagine. Many local organizations and individuals have responded, including some staffed entirely with volunteers, and that operate with little or no "overhead" so that all donations are placed directly into the hands of those displaced by these devastating fires. We have found volunteers here in Klamath who are working directly with such organizations in the Chico, CA, area.

Volunteers who work directly with those now living in temporary shelters have identified some of the most requested and urgently needed items. Stephanie Steel of Embassy of Heaven listed those needs in order of importance:

Funds are desperately needed. Many are in need of prescription medication, gas for commutes that have become longer, and other expenses due to sudden displacement. It has been requested that checks be in the amount of $100 or larger. This is because checks must be deposited in the church account, then re-issued in the name of the recipient, store, or facility providing the products or services (such as prescriptions, clothing, gas, medical care, etc._ Consequently, keeping records for smaller amounts becomes complicated and time-consuming, and detracts from other more critical services being provided for these individuals and families. Specific details for donating checks is listed in the "Where to Donate" section at the right.

We realize that recovery will be a long process for these folks, and hope to participate as much as possible in restoring some stability to their lives and the lives of their animals. As more information becomes available, we'll be updating this site with new needs and resources, and hope to share stories of those who are putting their lives back together, one piece... and one day... at a time.